Welcome to the home of best-selling author Rob Howell and his Firehall Sagas . Here you will find all the characters, locations, and everything else in the world of Eard and the Firehall Sagas . 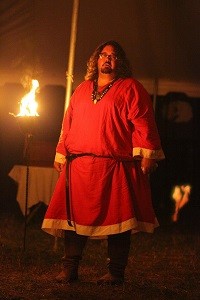 Here's Rob performing a portion of Beowulf in Old English in a firehall at Pennsic (Photo by Kate Gill).

The Firehall Sagas are tales from a world filled with wars and intrigue, shining steel and powerful spells, heroes and villains. Murder mysteries solved by Edward Aethelredson and great quests led by Irina Ivanovna are just two of the stories recounted here.

There is a Timeline of Eard here. If you're curious about the Magic in Eard, click here. If you want to see maps, please go to the Maps of Eard page.

The folk of this world live in interesting times, though they don't know it yet.

Behind it all are the secrets of Rurik's Pyre, which sits in the Firehall of the Great Mothers of Periaslavl. The time has come for those secrets to come to light.

Rob Howell is the publisher of New Mythology Press , including his work as editor of the Libri Valoris anthologies of heroic fantasy. Here he is with his favorite mug (Photo by Kate Gill).

He’s the creator of the Firehall Sagas and an author in the Four Horsemen Universe . He writes epic fantasy, space opera, military science fiction, alternate history, redneck horror, and whatever else seems fun.

He is a reformed medieval academic, a former IT professional, and a retired soda jerk.

His parents discovered books were the only way to keep Rob quiet. He latched onto the Hardy Boys series first and then anything he could reach. Without books, it’s unlikely all three would have survived.

So come inside, readers. There's an adventure waiting for you.